I worked with a college running back last summer who was contemplating quitting football because of chronic hamstring injuries starting in high school and on through his first two years of college. This young man actually had well developed hamstrings, was exceptionally strong, and had great hamstring flexibility. He should! He had been working on hamstring strength and stretching religiously for three years. This is what he was told to do over and over again by his high school coach, college team physician, athletic trainer, and strength coach.

Muscle strains are not always the result of that muscle being tight or weak. Many times the injured muscle is functioning just fine right up until the causative event. What we need to do first is look at the mechanisms of injury.

During sprinting or while kicking, the hamstring experiences lengthening across the hip, as it flexes, and across the knee, as it extends. Eccentric hamstring strength plays a role at this point, basically decelerating the lower leg at maximum length. There was an excellent article in the most recent NSCA Strength and Conditioning Journal (Brughelli M, Cronin J) on this exact topic. They were basically looking at the length tension curve of the hamstring and the location of an athlete’s peak tension. Injuries tend to happen during the descending portion of the curve, and what they found was that reduction in injury coincided with increasing the optimum length of thepeak tension. In other words, produce greater eccentric hamstring tension at longer muscle lengths. There were several studies presented to back this up.

A variety of eccentric hamstring strengthening exercises were given, check the article for more detail. 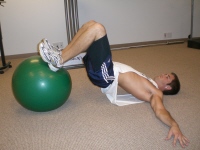 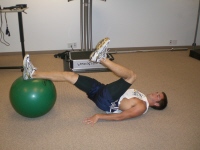 The hips must remain extended throughout the curl portion of the lift. Hip extension is a secondary function of the hamstring group. This brings me to my next point.

A second mechanism of injury comes as the athlete’s lead foot makes contact and must propel the athlete forward again. Track athletes are often taught to “reach and pull” with the lead leg to increase stride. Bad idea. This goes back to the length tension curve again. The hamstrings are maximally lengthened, then have to perform a maximum contraction to pull the sprinter’s body over that leg. It is a concentric contraction at this point but the hamstrings are passively insufficient, meaning lengthened too much to generate the appropriate force.

No special exercises needed here. Just train or rehab your athletes teaching them to “push” rather than “pull”. This will allow the glutes and quads to come into play to a much greater extent taking load off the hamstrings. The lead leg will now land appropriately under the athlete allowing for proper hip extension, a greater stride, and more speed.

A third mechanism has to do with synergistic dominance. Many muscles are often responsible for a certain movement, in this case we are talking about hip extension. Synergistic dominance involves one muscle over powering the others. Hip extension is supposed to be the job of the glutes but what often happens is that the hamstrings become the dominant muscle group. This is not at all what they were designed to do and thus are badly over worked. So the athlete with the strong hamstrings and chronic strains can actually blame his weak glutes (Sahrmann).

So now that we have established hamstrings dominance, how do we rewire the athlete?

Roller goes under the thighs just above the knees. Have the athlete perform a glute set first, then lift the hips. It is almost impossible to contract the hamstrings in this position.

Athlete presses through the heels with the toes up (this will actually increase the contribution of the quad but reciprocally inhibits the hamstrings). Tighten glutes then lift the hips, manually cue the athlete to keep the hamstrings turned off.

Pressing through the heel with toes up. Tighten glute then lift again attempting to shut off the hamstrings. 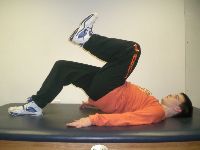 I will also have the athlete work in prone from time to time as well attempting to contract the glutes first then perform hip extension. This can be done with the knee straight or bent. If knee is bent, the therapist or trainer must support the lower leg. If the athlete really struggles with this have him or her press the leg into your hand to engage the quads and inhibit hamstrings, then tighten the glutes.

Joe Heiler MSPT is the owner and content manager of SportsRehabExpert.com, a website dedicated to advancing the education of rehab and performance professionals. The site focuses on orthopedic and sports physical therapy topics through webinars, audio interviews, articles, manual therapy and exercise videos, and more.

Joe is also the owner of Elite Physical Therapy and Sports Performance in Traverse City, MI specializing in orthopedics and sports medicine, as well as athletic performance training. He is Graston Technique (GT) Certified as well as a GT Instructor, SFMA and FMS trained, and is passionate about a number of soft tissue and manual techniques including Trigger Point Dry Needling and manipulation.